This project is a public art proposal created as part of my classwork for a sculpture studio.

Ascendancy consists of three concentric rings made out of dichroic acrylic, suspended over a small rooftop  area of the Boston University Booth Theatre Complex.

As an MFA theatre designer, I spent a great deal of time in the Booth building and was drawn to the open area on the roof, space which I felt was underutilized. The area is surrounded by faculty offices and classrooms, with windows that look out onto the common area. I wanted to create an installation that would bring visual interest to the area for the many students and professors who look out onto the courtyard. Additionally, I hoped to attract new visitors to the building, particularly art students from other disciplines, who mostly spent their time in the College of Fine Arts building across the way, or the 808 Gallery next door. In this way, I hoped to facilitate more frequent interaction and collaboration among student artists of a variety of disciplines.

One particularly interesting feature of the site is the way daylight interacts with the geometry of the building. As the sun rises and sets, the light falling onto the inner walls of the courtyard changes angle and direction over the course of the day, and I was interested in creating a sculpture that would respond to the changes in light. Since the building was so recently constructed, I wanted my sculpture also to give a nod to the architectural design. I was especially attracted to the dichroic finish of the building exterior, and wanted to emulate this quality in my sculpture.

After some research, I chose to construct my sculpture from dichroic acrylic, a material that would be responsive to changes in daylight, and also one that would highlight the dichroic surface of the building exterior.

I was interested in the way the color of light going through the acrylic, as well as the light reflected from its surface, was impacted by angular changes. See below from some research imagery:

The concentric circular shape of the structure emerged from the idea that it was a visual locus, of sorts, a centerpiece for the offices and classrooms surrounding the perimeter of the exterior space.

Additionally, it is a nod to the circular shape of Greek amphitheatres, where western drama was born. See visual research to the right. 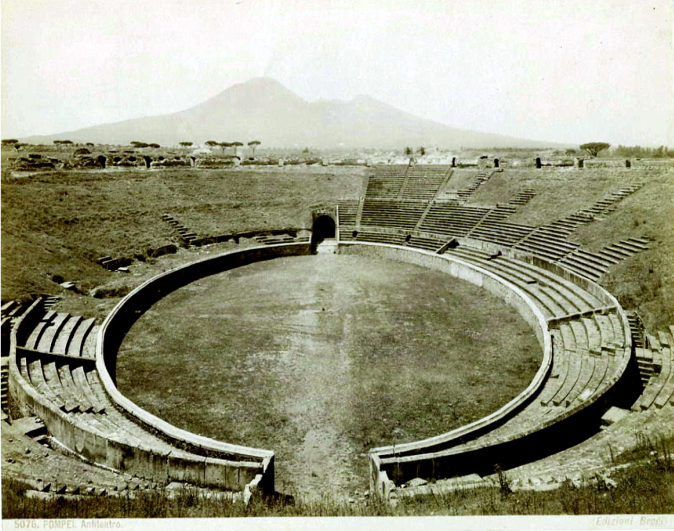 I determined that the sculpture would be constructed out of acrylic sheets heat-formed into circular arcs and then covered with dichroic film. I planned to suspend the upper ring using a thin aircraft cable attached to the roof on either side of the courtyard. The smaller rings would be attached with cable (clear if possible) to the upper ring. The structure would weigh ~100 lbs and the materials for the sculpture and its rigging would cost approximately $1890.

I completed a very rough scale model to get a sense of the sculpture’s size, and then completed some 3D renderings. Though the 3D renderings show the colorful surface of the material, they don’t show the colorful interaction of daylight and dichroic acrylic. My hope was that the visual experience of the installation would include both the mysterious suspended concentric circles, as well as colorful beams of light scattered around the courtyard as part of the dynamic interplay between the sculpture and the ever-changing daylight. My renderings and rough model are displayed below: 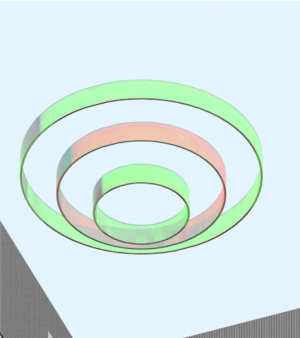 Rendering: view from below 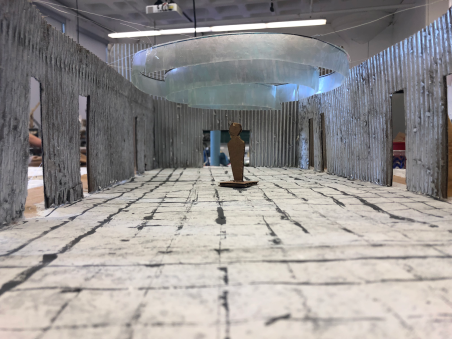